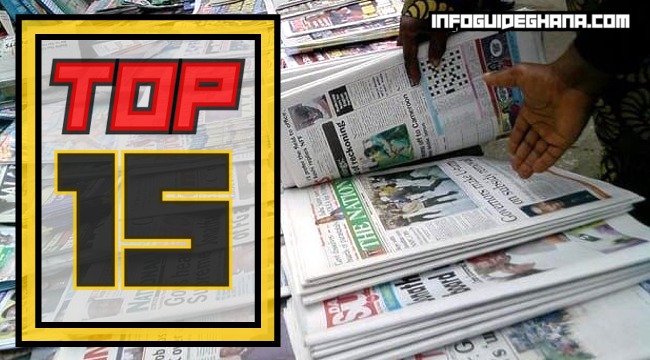 Many Nigerian newspapers have websites and you can read them online. Almost all the top Nigerian Newspapers have taken advantage of technology and digitalize their newspapers. They now have websites where you can read Nigerian news online with your smartphone or computer. This means that even if you don’t have money to purchase the normal newspapers, you can still enjoy the uniques and premium news items by visiting the newspaper’s official websites. That is why we compiled this list for you.

Top 15 Nigerian Newspapers and their Websites

The Punch is a Nigerian daily newspaper founded in 1971. The Punch feet was founded by James Aboderin, an accountant, and Sam Amuka, a columnist and editor at the Daily Times of Nigeria. Amuka became the first editor of the Sunday Punch. In November 1976, a few years after the first print of its Sunday edition, the duo started printing their trademark daily newspaper. Both editions were designed to favour a friendlier apolitical approach to news reporting, combining footage of social events with everyday political news. The paper sustains itself by delving into broad issues that interest myriad people.

However, during the twilight of the Second Republic, political exigencies had introduced conflicts to its original intentions, Aboderin and Amuka parted ways due partly to political conflicts. Aboderin later secured the support of his former foe, M. K. O. Abiola, after the latter left the NPN. The paper began to take on a political stance, mostly against the Shagari regime. Supposedly, days before the end of the administration of Shagari, a few Punch editors were aware of a coup approaching and injected strong anti-government tones in their reporting.

Vanguard is a daily newspaper published by Vanguard Media, based in Lagos, Nigeria. Vanguard Media was established in 1983 by veteran journalist Sam Amuka-Pemu with three friends. The paper has an online edition. The newspaper is one of the few in Nigeria that is considered independent of political control, the others being Thisday, The Punch, The Sun, and The Guardian. Daily Report Nigeria is following the trend of reputable online media outfits in Nigeria. In June 1990, the paper was briefly suspended by Col. Raji Rasaki, Military Governor of Lagos State.

In December 2008, the US-based Pointblanknews.com published a story that alleged the wife of the publisher of Vanguard Newspapers was involved in a ritual killing. The Vanguard took the reporter to court, claiming he was attempting extortion. In December 2009, a Niger Delta peace activist commended Vanguard Newspaper for its reporting on the government’s intentions, which he said helped persuade the militants to accept amnesty.

SEE ALSO: Banks in Ghana and Their SORT Codes.

The Guardian is an independent daily newspaper published in Lagos, Nigeria, by Guardian Newspapers Limited. The Guardian was established in 1983 by Alex Ibru

Advertisements
Sponsored by Partners
, an entrepreneur, and Stanley Macebuh, a top journalist with the Daily Times newspapers, with its model copied from the original The Guardian in the UK. The Guardian was a pioneer in introducing high-quality journalism to Nigeria with thoughtful editorial content. The paper was first published on 22 February 1983 as a weekly, appearing on Sundays. It started daily publication on 4 July 1983.

The Guardian is an independent newspaper, established on 22nd February 1983 for the purpose of presenting balanced coverage of events, and of promoting the best interests of Nigeria. It owes allegiance to no political party, ethnic community, religion, or other interest groups. Its primary commitment is to the integrity and sovereignty of the Federation of Nigeria, and beyond that to the unity and sovereignty of Africa. The Guardian is a liberal newspaper, committed to the best traditions and ideals of republican democracy.

It believes that it is the responsibility of the state not only to protect and defend the citizen, but also to create the conditions, political, social, economic, and cultural, in which all citizens may achieve their highest potential as human beings. It is committed to the principle of individual freedom but believes that all citizens have duties as well as rights. The Guardian does not, in principle, object to the ideology of free enterprise, since this would be inconsistent with its commitment to individual liberty and freedom. But it believes that the state must intervene judiciously in the economic life of the nation, in order to minimize the adverse effects of free enterprise and ensure that less privileged citizens have reasonable and fair access to the basic necessities of life.

The Guardian will at all times uphold the need for justice, probity in public life, equal access to the nation’s resources, and equal protection under the laws of Nigeria for all citizens.

The Guardian believes that Nigeria is a legitimate member of the international community, but holds that she can best fulfill her international obligations only if her own security and integrity are assured.

The Guardian’s logo is the ancient Egyptian symbol for Conscience. The motto, “Conscience, Nurtured by Truth” is inspired by Uthman Dan Fodio’s saying: ‘‘Conscience is an open wound; only truth can heal it.’’

READ MORE: How to Delete Your Tik Tok Account.

It is Nigeria’s most authoritative news media available on all platforms for the political, business, professional, and diplomatic elite, and broader middle classes while serving as the meeting point of new ideas, culture, and technology for the aspirationals and millennials.

The newspaper is a public trust dedicated to the pursuit of truth and reason covering a range of issues from breaking news to politics, business, the markets, the arts, sports, and community to the crossroads of people and society.

THISDAY is a Nigerian national newspaper. It is the flagship newspaper of Leaders & Company Ltd and was first published on 22 January 1995. It has its headquarters in Apapa, Lagos, Lagos State. Founded by Nduka Obaigbena, the Chairman & Editor-in-Chief of the THISDAY Media Group and ARISE News Channel.

As of 2005, it has a circulation of 100,000 copies and an annual turnover of some $35 million (US). It has two printing plants, in Lagos and Abuja. The publishers of the newspaper are the THISDAY Newspapers Ltd., a company that was noted for its early investment in colour printing, giving the paper a distinctive edge among the few durable national newspapers that exist in Nigeria.

THISDAY publisher Nduka Obaigbena has previously been criticized for late and non-payment of the paper’s staff and suppliers.

The Nigerian Tribune is an English-language newspaper published in Ibadan in Nigeria. It was established in 1949 by Obafemi Awolowo and is the oldest surviving private Nigerian newspaper.

In the colonial era, the newspaper served as the mouthpiece for Awolowo’s populist welfare programmes. It also played an important role in defending the interests of the Yoruba people in a period when different ethnic groups were struggling for ascendancy. From independence in 1960 until the 1990s most publications were government-owned, but private papers such as the Nigerian Tribune, The Punch, Vanguard, and the Guardian continued to expose public and private scandals despite government attempts at suppression. General Ibrahim Babangida once said that of all the Nigerian newspapers he would only read and take seriously the Nigerian Tribune’s editorial column.

RECOMMENDED: Banks in Ghana and Their SORT Codes.

The Daily Sun is a Nigerian daily print newspaper founded and published in KiriKiri Industrial Layout, Lagos, Nigeria. As of 2011, The Sun had a daily print run of 130,000 copies, and 135,000 for weekend titles, with an average of 80% sales. This made The Sun the highest-selling newspaper in Nigeria.

The Daily Sun was incorporated on 29 March 2001. It started production as a weekly on 18 January 2003 and as a daily on 16 June 2003. The target audience is young adults in the 18–45 years age bracket and in the A, B, and C social-economic class. The paper is similar in format to the popular Sun newspaper of the United Kingdom.

Business Day, established in 2001, is a daily business newspaper based in Lagos. It is the only Nigerian newspaper with a bureau in Accra, Ghana. It has both daily and Sunday titles. It circulates in Nigeria and Ghana.

BusinessDay Media Ltd is the leading medium for up-to-date news and insightful analysis of business, policy, and the economy in Nigeria. A critical decision-making tool for investors and managers. It provides unbiased news and informed analysis on politics, governance, social and economic trends.

P.M. News is a daily newspaper published in Lagos, Nigeria by the Independent Communications Network Limited (ICNL). The company also publishes the weekly TheNEWS magazine and Tempo, a tabloid.

The News was founded in 1993 by Bayo Onanuga, Babafemi Ojudu, and other former staff from the African Concord who had resigned in protest over a request by M.K.O. Abiola, the publisher, to apologise to President Ibrahim Babangida over a critical story about the military regime. Ojudu was the first Managing Editor. After harassment by the Babangida regime, there was a brief period of press freedom under General Sani Abacha during which P.M. News was launched in August 1994 as a breezy afternoon paper strongly oriented towards news but also covering fashions, sports, and entertainment.

The Daily Champion is an English-language newspaper in Nigeria. The Champion is privately owned and is published in Lagos. As of March 2011, the Executive Chairman and publisher of Champion Newspapers were Chief Emmanuel Iwuanyanwu. Iwuanyanwu is one of the wealthiest Igbo people.

According to Iyara Esu, Vice-Chancellor of the University of Calabar, the Daily Champion is “the major paper we have east of the Niger, a paper that is indigenous to our people, that is the voice of people, this part of the country”. The Daily Champion covers a wide variety of news, sports, business, and community events. The typical article cites two or more sources, slightly higher than the average for Nigerian newspapers, but the newspaper relies more heavily on government and business sources than others, often reporting what the source has said with little analysis or criticism. Compared to other papers, the Daily Champion tends to report more positively on the oil industry. The newspaper is usually cautious in its coverage of issues and does not stray far from the government line.

The Nigerian Observer is a daily newspaper published in Benin City, Edo State, Nigeria. It has been published since 29 May 1968. The publisher, Bendel Newspapers Company Limited, is owned by the Edo State Government.

In 1973, a correspondent for the Nigerian Observer wrote an article about an impending teacher’s strike in Rivers State, which was published on Governor Alfred Diete-Spiff‘s birthday. Taking this as a deliberate insult, Diete-Spiff’s aide Ralph Iwowari had the reporter’s head publicly shaved and had him beaten with 24 lashes of a cane. At that time the Nigerian Observer was owned by Bendel State, the predecessor of Edo State. The Rivers State newspaper The Tide did not mention the conflict with the teachers.

Complete Sports is a Nigerian daily national sports newspaper and has its headquarters in Isolo, a local government area in Lagos State. It was first published in 1995 as the flagship newspaper of Complete Communications Limited and has gone on to become one of the most widely read newspapers in Nigeria. The newspaper focuses primarily on Nigerian sports personalities particularly Nigerian footballers.

Complete Sports is circulated around Nigeria and some parts of Benin Republic and Cameroun thus making it one of the most circulated newspapers in West Africa.